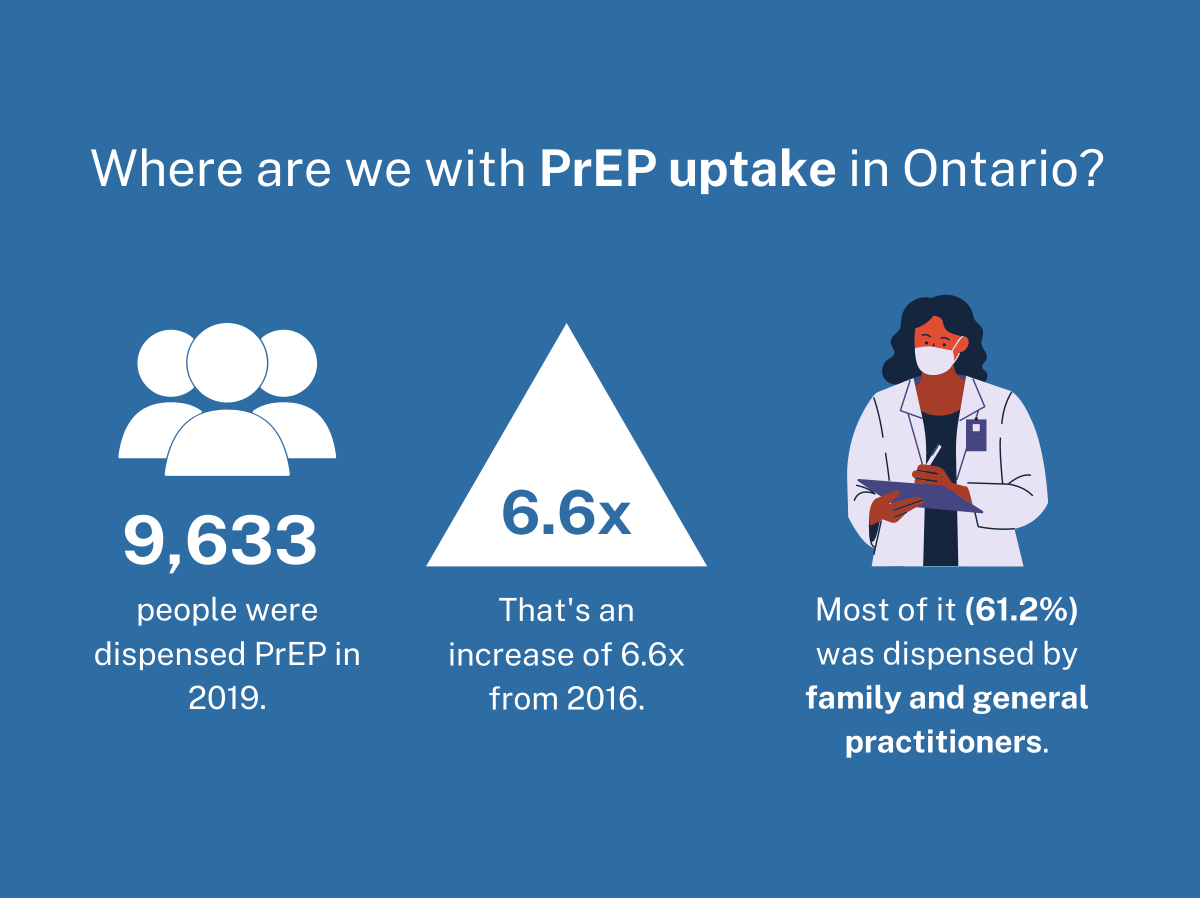 HIV pre-exposure prophylaxis (PrEP) is the use of daily antiretroviral medications by HIV-negative individuals to reduce their risk of HIV infection. PrEP is a highly effective HIV-risk reduction strategy and a critical part of a comprehensive approach to HIV prevention. To improve access to PrEP, it is important to monitor PrEP uptake. However, Ontario does not currently have a provincial-level monitoring system for PrEP.

To close this gap, the Ontario HIV Treatment Network is pleased to bring you this report summarizing PrEP uptake and PrEP prescribing in Ontario from 2016 to March 2020. This report contains projected provincial-level estimates which are based on Truvada (inclusive of generics) or Descovy dispensation data from more than 2,100 pharmacies across Ontario provided by IQVIA1. An update and expansion of the October 2019 PrEP report published by the OHTN (“HIV pre-exposure prophylaxis in Ontario”), this report describes:

PrEP use is increasing

The estimated number of PrEP users in Ontario increased dramatically (6.6 times) between 2016 and 2019.

Most PrEP users are men

PrEP is indicated for gay, bisexual and other MSM who meet risk criteria. As we expect, the majority of PrEP users are male (97%). While, PrEP use has increased for both men and women, it is increasing faster for men.

Assessing successful uptake of PrEP in women is not straightforward, as overall risk for HIV in women is lower, and PrEP guidelines are less developed for women as compared to men.

People mainly get PrEP from their family doctors and use private insurance to pay for it. In 2019…

of the estimated PrEP users were prescribed PrEP by family and general practitioners.

of the estimated PrEP users covered the cost of the prescription through private health insurance.

Between 2018 and 2019, the estimated number of physicians who prescribed PrEP increased by 32%.

Most PrEP prescribers are in Toronto and Ottawa

In 2019, Toronto and Ottawa had the largest number of physicians who prescribed PrEP – together accounting for 6 in 10 PrEP prescribers (60.7%) when these regions made up only 27.4% of Ontario’s population. This may be explained by Toronto and Ottawa having disproportionately more gay, bisexual, and other men who have sex with men (GBMSM) who are eligible for PrEP, and/or individuals traveling into these cities to obtain PrEP. Nevertheless, the number of PrEP prescribers increased between 2018 and 2019 for almost all regions in Ontario.

Assessing successful uptake of PrEP in women is not straightforward, as overall risk for HIV in women is lower, and PrEP guidelines are less developed for women as compared to men.

Among gay, bisexual, transgender, Two-Spirit and queer (GBT2Q) men in the Sex Now 2019 study who met the criteria for PrEP based on the Canadian guidelines, 36.0% were currently on PrEP.

Much more information is provided in the full report.