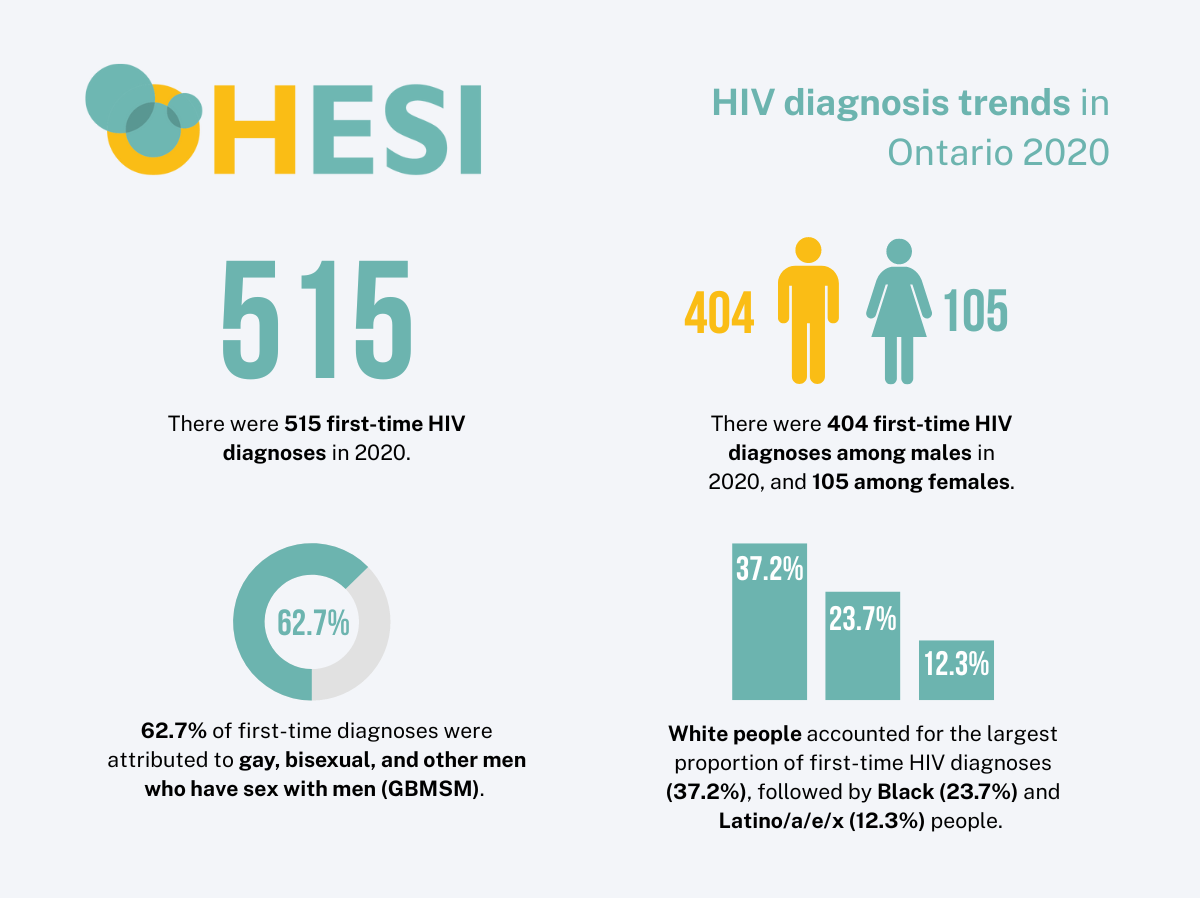 Understanding trends in HIV diagnoses is essential to planning for HIV prevention as well as treatment and care programming and supports. The Ontario HIV Epidemiology and Surveillance Initiative (OHESI) is pleased to announce a new report: HIV diagnoses in Ontario, 2020. It describes trends in HIV diagnoses in Ontario over the past decade (2011-2020), with a focus on the recent impacts of the COVID-19 pandemic. It includes overall findings presented by sex, HIV exposure category, race/ethnicity, age, and geographic location, as well as trends among the populations in Ontario most affected by HIV: gay, bisexual and other men who have sex with men (GBMSM), people who inject drugs (PWID), people who are African, Caribbean, or Black (ACB), Indigenous Peoples, and cis and trans women, including those from the communities above, who face systemic and social inequities, and are more likely to be exposed to HIV through a sexual or drug using partner.

The COVID-19 pandemic affected access to HIV testing and clinical care in 2020. OHESI previously discussed its impact in our blog post, Impact of COVID-19 Pandemic on HIV testing and diagnosis in Ontario. This 2020 HIV Diagnoses Report elaborates on the changes seen in 2020. Key findings are highlighted in this blog post.

Trends should be interpreted with caution. The decreased numbers of diagnoses observed in 2020 may be due to a number of factors such as changes in access to HIV testing, decreased migration into the province by those previously diagnosed with HIV, and/or decreased HIV transmission related to COVID-19 public health measures and/or utilization of HIV pre-exposure prophylaxis.

Due to missing data on HIV test history, we estimate between 6.9% and 8.1% of first-time HIV diagnoses to have been potentially misclassified.

HIV diagnoses decreased in both males and females in 2020

Figure 3a: Number of first-time HIV diagnoses by HIV exposure category, Ontario, 2016 to 2020

Figure 3b: Percent of first-time HIV diagnoses by HIV exposure category (where reported), Ontario, 2016 to 2020

Figure 4b. Number of first-time HIV diagnoses by race/ethnicity, females, Ontario, 2016 to 2020

Decrease in rate of diagnoses was not universal across regions

Compared to 2019, the rate of first-time HIV diagnoses per 100,000 people decreased in all regions except Ottawa and Eastern, with the largest relative decreases in the South West (36.1%), followed by Toronto (30.0%) and Central East regions (29.0%).

No priority population was disproportionately impacted by reduced HIV testing

In terms of first-time diagnoses by the five populations most affected by HIV (which are not mutually exclusive), the number of diagnoses declined in all groups in 2020 compared to 2019, but there was little change in the distribution of diagnoses across groups. This finding likely indicates that no one population was disproportionately affected by the decrease in HIV testing. This new report on HIV diagnoses in Ontario 2020 includes sections for each of these five populations, with breakdowns within each.