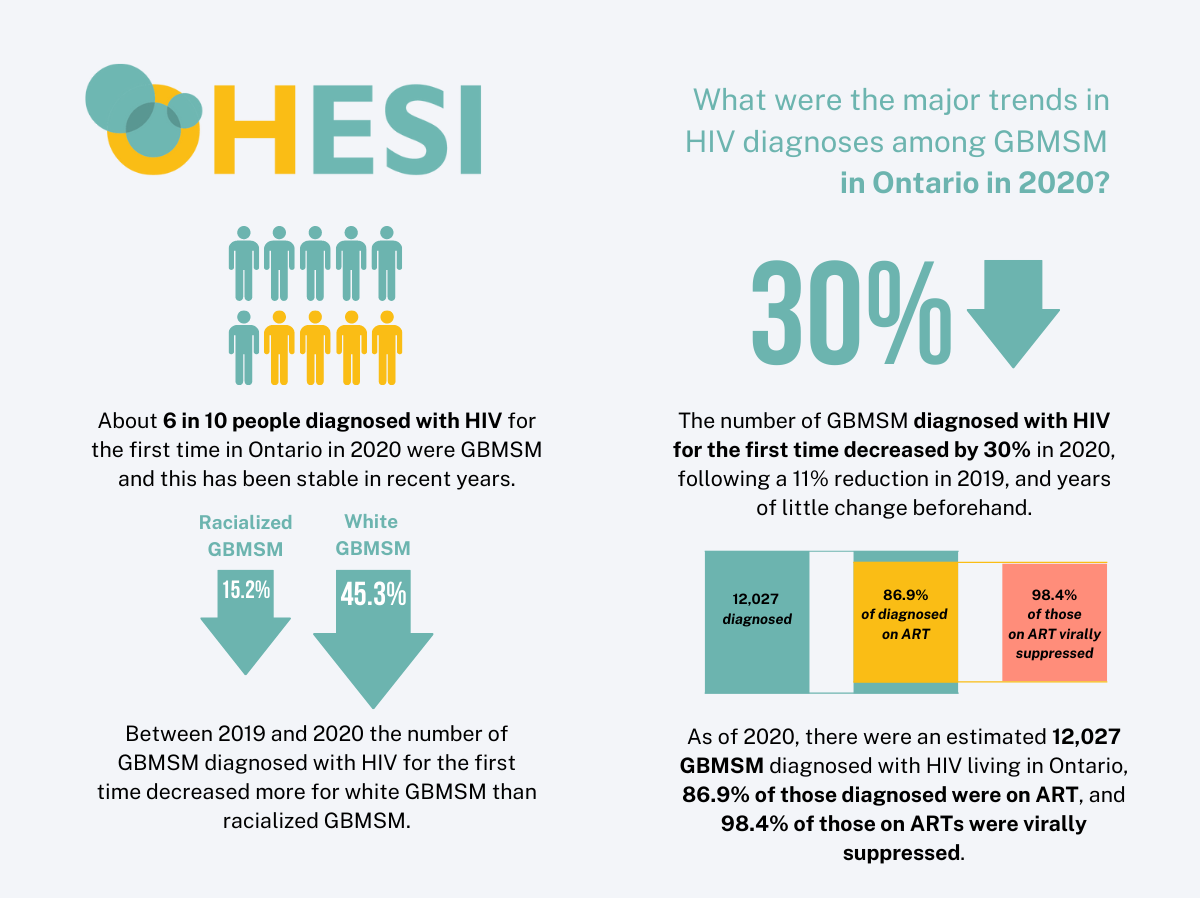 This 2022 Pride season, the Ontario HIV Epidemiology and Surveillance Initiative (OHESI) acknowledges all 2SLGBTQI+ people. We are pleased to share a snapshot describing the HIV epidemic among gay, bisexual, and other men who have sex with men (GBMSM) in Ontario. This blog post highlights 2020 data on HIV tests, diagnoses and the HIV care cascade in GBMSM. During that year, the COVID-19 pandemic had an impact on testing, diagnoses and services for all people in Ontario, so these data should be interpreted with caution.

For more information about efforts to prevent HIV, improve outcomes for GBMSM living with HIV in Ontario and to learn about the ways to build capacity for those working in care and prevention, visit the Gay Men’s Sexual Health Alliance.

Due to the COVID pandemic, there was a decrease in HIV testing in Ontario in 2020. The number of tests in males was down 28.5% compared to 2019. The HIV test positivity rate in males increased however after years of decreasing. It was 0.169% in 2020: up 10% from 0.154% in 2019. While a higher test positivity rate can mean an increase in HIV transmission, in 2020 it was more likely that relatively fewer males at low risk of HIV were tested. (See OHESI’s December 2021 blog post for about this [Figure 1 and Figure 3].)

Among the 29.6% of HIV tests in males with a reported HIV exposure category, GBMSM made up a larger share than in the previous years: from 29.7% in 2016 to 37.8% in 2020. This shows that GBMSM are greatly overrepresented in HIV tests in Ontario, as we previously estimated GBMSM to represent 4.1% of adult men in the province. Given that GBMSM make up the majority of first-time HIV diagnoses in Ontario, it is logical that they are overrepresented in HIV testing.

Trends in the number of GBMSM diagnosed with HIV*

Diagnoses attributed to GBMSM are defined by having reported male or transgender male sex, and sexual contact with men as an HIV risk factor. As this information was not reported for 15.7% of first-time HIV diagnoses and 15.9% of all positive HIV tests between 2011 and 2020, reported counts may represent underestimates. Data shown are where GBMSM status was reported.

Figure 2. Number of first-time HIV diagnoses and people with previous evidence of HIV, GBMSM, Ontario, 2011 to 2020

Of the 270 total positive HIV tests among GBMSM in Ontario in 2020, at least 55 (20.4%) were GBMSM who already knew they had HIV – that is, GBMSM diagnosed elsewhere who were entering care in Ontario – and 215 (79.6%) were considered first-time HIV diagnoses, meaning they were learning they have HIV for the first time and were more likely to have acquired HIV in Ontario.

Between 2019 and 2020, there was also a decrease in the number of positive tests in GBMSM who already knew they had HIV: from 77 to 55. This change was likely due to decreases in immigration and migration during COVID-19, which resulted in fewer positive tests among persons with previous evidence of HIV.

*OHESI’s previous factsheet, “HIV epidemiology update for gay, bisexual, and other men who have sex with men (GBMSM) in Ontario, 2019”, reported estimated total counts of first-time HIV diagnoses among GBMSM by accounting for diagnoses with unknown GBMSM status. We instead report raw counts here, while noting that GBMSM status was not reported for 15.7% of first-time HIV diagnoses. Therefore, these numbers will differ.

Note: Using test history information, OHESI estimates that approximately 5-6% of men categorized as first-time HIV diagnoses between 2011 and 2020 already knew they had HIV before testing positive in Ontario.

The number of GBMSM diagnosed with HIV for the first time who reported only male-to-male sexual contact has decreased since 2017, from 338 to 206 in 2020. The number who also reported injection drug use (IDU) decreased from 23 in 2019 to 9 in 2020. HIV risk factors, particularly IDU, may not have been as well captured in 2020 compared to prior years due to disrupted testing services.

Figure 3b. Percent of first-time HIV diagnoses in GBMSM that reported IDU in addition to male-to-male sexual contact, Ontario, 2011 to 2020

Toronto saw largest drop in first-time HIV diagnoses among GBMSM in 2020, but still had two thirds of GBMSM diagnoses

The HIV Care Cascade among GBMSM

The HIV care cascade is a way to assess whether all Ontarians living with HIV are getting appropriate care and have the opportunity to achieve good health outcomes. The cascade monitors three key indicators: the proportion of people diagnosed with HIV who are in care, the proportion who are on antiretroviral treatment (ART), and the proportion who are virally suppressed (which protects their health and prevents HIV transmission to their sexual partners).

Approximately 12,000 GBMSM diagnosed with HIV were living in Ontario in 2020

Figure 6. Number of GBMSM diagnosed with HIV, and proportion of diagnosed  in care, on ART, and virally suppressed, Ontario, 2020

As of 2020, there were an estimated 12,027 GBMSM diagnosed with HIV living in Ontario, of which we estimate 88.7% were in care, 86.9% were on ART, and 85.6% were virally suppressed. High levels of engagement in care and being on treatment mean that most GBMSM diagnosed with HIV are virally suppressed and cannot pass on the virus to their sexual partners.

Most GBMSM living with diagnosed HIV in Ontario were in care, on ART and virally suppressed in 2020

We do not have estimates for the undiagnosed fraction specifically among GBMSM in Ontario in 2020. For the last two measures: 86.9% of GBMSM diagnosed with HIV were on ART and, of those, 98.4% were virally suppressed (VL<200 copies/ml).

Figure 8. Time from HIV diagnosis to linkage to care for GBMSM newly diagnosed with HIV in Ontario, 2019

Figure 9. Time from HIV diagnosis to viral suppression for GBMSM newly diagnosed with HIV in Ontario, 2019

Find this information and more in our 2020 HIV tests report, and upcoming Diagnosis and Cascade Reports!